Today marks a milestone in my time as a researcher and community music advocate in the Gaspé. Over a year ago in August 2015, I approached Leo Fitzpatrick of Gaspé Harbour to express my interest in working with his massive collection of home recordings (over 440 tapes) that he made between 1958 and 2000. I wanted to use these tapes for part of my PhD research into home recording practices in Gaspé. After a few meetings, Leo offered to give me his entire collection. Naturally, I felt honoured. As he explained to me, he wanted his tapes to go to someone who would cherish them and would work to honour the memory of his friends—many now deceased—and the music they made. However, as I live between several provinces and need to fit most of my life’s possessions in my trusty Subaru, I had to acknowledge that I simply wouldn’t be able to give a collection this size the care it deserves.

In the fall of 2015, Leo and I began discussions with Jeannot Bourdages, the archivist at the Gaspé museum, to see whether Leo’s collection would accord with their mandate and if they would take ownership. Jeannot was a pleasure to work with from start to finish. He’s bilingual and has an intellectual open-mindedness that I admire, being genuinely curious about the complexities of Gaspesian history including all its diverse communities regardless of language or cultural background. In March, the administration of the Museum wrote Leo and I to acknowledge the value of his tapes in documenting Gaspesian culture and to tell us that they would accept his collection. We agreed to begin the donation this summer, after I had returned to Gaspé from Newfoundland (where I go to school).

Leo Fitzpatrick hauling tapes to my car before our museum visit (Sept 8, 2016; Photo by Glenn Patterson)

This morning, I stopped by Leo’s place and we made the first of several trips to the archives to begin donating his collection. Once there, we met with Jeannot and took stock of the four boxes of reel-to-reel tapes we had brought and signed the donation agreements for the first 89 tapes in his collection (from 1958 to the late 1970s). Jeannot also gave Leo and I a tour around the archives, including their state-of-the art storage facilities which are precisely controlled for temperature and humidity to prevent deterioration of documents and objects in their care (recently, the museum acquired the business records of the Robin company going back to 1777).

So what does this mean? Having made the first of several donations, the music Leo captured for over forty years will soon be available to the public through in-person visits to the archives. Fortunately for all of us, Leo created two binders meticulously cataloguing each tape wherein he wrote the name of the piece, the performers, and the date it was recorded. And so, should you go to the archives, it will be as simple as flipping through his binder to finding the tapes you want to listen to using their on-site playback equipment. Today, Leo and I left feeling both happy and proud that his tapes and the musicians they feature would be given the utmost professional care and be preserved and available to future generations. 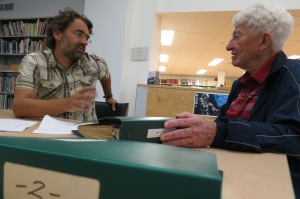 To celebrate this milestone, I would like to share with you the first tape in Leo’s collection, recorded in 1958 on a 5″ reel-to-reel of 1/4″ tape. The tape is presented in its entirety below.

Side A begins with a fictitious broadcast from “Gaspé WPR, bringing you the guys from Little France.” Here, Leo and his friends (Leonard and Harris Vezina, Leo Bernier, and André Labbé) mimic a radio broadcast and play a fantastic selection of fiddle tunes and country and bluegrass songs. (“Little France” was the local name for the section of Gaspé Town which I believe is the area going back from around Jacques Cartier behind the present-day Jean Coutu and up the slope.) Things calm down in the second part of the tape towards the end of Side A and for most of Side B with recordings of country and early rock n’ roll music from singers like Irvine Patterson, Ralph Boulay, Oscar Vezina and André Labbé. The cassette closes with a very raw and powerful performance of Bob Doolin (or Dolan) singing an old ballad “The Faithful Sailor Boy” in the old unaccompanied and full-voiced style. He was apparently born in Ireland and emigrated to Gaspé and was an old man when Leo was a young man. Leo described Doolin as “a rough old character” and remembers recording him in Johnny Stewart’s barber shop because there was no electricity at Bob Doolin’s place. There are a few original songs in this batch including at least “Taxi Driver Blues” (Leo Fitzpatrick’s semi-autobiographical lament about being a local taxi driver for several years on the side of other full-time jobs), “André’s Song” (a fun monster-inspired rock romp from André Labbé), and likely “She Was Only Sixteen” (Oscar Vezina).

Feel free to contribute information or memories of any of the musicians you hear on this tape.