Here are some recordings and an interview I’ve been wanting to share for a few months. Last November, I spent an afternoon with Nash Stanley at his family’s home in York. We recorded about a dozen songs and did an interview about his music. I provided some lead guitar and fiddle on two of the tracks you’ll hear below.

I first saw Nash at the Malbay Festival in 2014 and was impressed by the maturity of his voice and his stage presence. I got to know him better during the fall and winter of last year when we found ourselves at the same events like the Terry Fox Run, the Gaspé Cancer Society Christmas Tea, and the Belle-Anse School holiday amateur hour. He’s been very generous lending his talents to various community events since he started performing two years ago; last December, he even organized a Christmas amateur hour at the Polyvalent.

I’d like to thank Nash Stanley for obliging my request to make these recordings and interview him. I’ve selected four of our best takes and provided an edited transcript of our interview below. Apart from the third song (by Waylon Jennings), the songs are from George Jones. At the end of our interview, I asked Nash if he would sing the first song his father showed him, George Jones’ “Where Grass Won’t Grow,” with just him and his guitar. Nash connects with this song’s lyrics and mood so well. It was a special moment during our session. 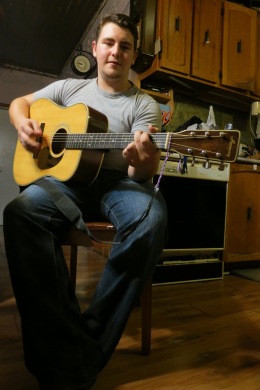 Glenn: Can you tell me how you got started playing music?

Nash: I’ve always been interested in playing music. Ever since I was a baby, I always had a guitar in my hand, although I was never really playing it. I always loved singing. But it was only Valentine’s Day of 2014 that I really picked up the guitar. My father sat down with me and I asked him to teach me a couple things. And I told him there’s a song by George Jones that I really loved called, “Where Grass Won’t Grow,” and could he teach me how to play it? And he taught me the intro, the chords to play, and which strings to hit. He had been trying to teach me for years by this time, but I never could get it.  And the one time he told me what strings to hit and all that, something clicked in my head and I got it right away.

Glenn: How old would you have been?

Glenn: And how old are you now?

Glenn: Are you in your final year of high school?

Glenn: Were there other musicians in the community that inspired you?

Glenn: Tell me about them.

Nash: Well I’ve seen them all the time, on video. And Johnny always had music videos when I was growing up. And I said, “oh, he’s my cousin, I just want to be like him.”

Glenn: I get the impression he’s from here but it seems like he doesn’t live here anymore?

Nash: No. I think he’s only lived here in the summer. I don’t know much about where he’s lived.

Glenn: Is he from Corte-Réal?

Nash: I think so.

Glenn: Is that where your family is from originally?

Glenn: Did you know him as a person? Was he around when you were growing up, someone you saw around? Or did you know him through people talking about him?

Nash: Well he would come down every now and then. I only remember him coming down once or twice when I was a kid. But he came down when he did the Malbay Festival in 2014. And that’s when I did the show with him. I did a song with him, “Bring it On.” And then I spent about two weeks with him non-stop. Because we were always down where he was staying, because we were always going in the woods during the summer. And I really got to know him then and we always had a good time. Every night we would sit by the fire out in front of his house and we would play guitar.

Glenn: What kind of music are you into and who are some of your favourite musicians?

Nash: Well I love country, but the classic country. I listen to new country but it’s not my favourite. My favourites have to be Waylon Jennings, George Jones, Dwight Yoakam, and Buck Owens.

Glenn: How do you go about learning new songs? It seems like you’ve got a tonne of songs and you’ve only been playing two years.

Nash: Well I listen to it and if I can’t remember it in my head after listening to it three or four times, I go on the Internet because I have a photographic memory. I’ll read the lyrics and if I can’t remember them, I can see in my head what I saw written down. Then if that doesn’t work, I’ll just listen to it about a thousand times until I can sing along with it. And then I’ll mute the music and I’ll sing it to myself and if I don’t get it right, well I’ll listen to it again and get the part right.

Glenn: So if things are going well, how long about would it take you to learn a song?

Nash: I learn the chords first, by playing along. Then I’ll learn the words. The words take maybe twenty minutes if it’s going good.

Glenn: So you have a photographic memory?

Nash: Yep. I think so anyway. That’s how I figure it. That’s how I learned one song. It wasn’t long ago. It was by Keith Whitley. It’s called “Bitch at the Bottom.” I found the lyrics. I was doing a project for class and we had to take songs and find out all the poetic devices they used and then find out what was “wrong” with them and make them “correct.” And I had the lyrics in front of me and after I went through the song about a thousand times looking for the poetic devices, once I was done the assignment, I knew the song so well that I could play it.

Glenn: Have you ever counted how many songs you know?

Nash: I can’t count that much. There’s too many to count.

Glenn: And normally, when you’re on stage at the Legion I know you have the computer software that plays the music under your voice, but are the words coming up as well or have you memorized all those songs?

Nash: Oh no there are words. I take videos off YouTube and I put them in my file. So I have karaoke in front of me. Because I’ll never be able to remember that many songs.

Glenn: For me where I went to school in the Toronto area, if you admitted you liked country your friends would laugh at you. But how about here, what do your friends think about country music?

Nash: Everyone loves country music. Although we often argue about whether new country or old country is better. But the people I hang out with are usually the old country so we get along pretty well with it. We’re all George Jones fans at our school.

Nash: Yep. Which is good for me because around here you wouldn’t think that. Because in this generation everyone loves that hip-hop country. But not me. In the city, I probably wouldn’t fit in but around here I’m glad to fit in.

Glenn: After you started playing, how long until you began playing shows?

Dancing to Nash Stanley at the Gaspé Legion – October 24, 2015 (Photo by Glenn Patterson)

Nash: Maybe half a year. About four months after I started putting videos up on Facebook, the Malbay Festival asked me to go to their amateur hour. Then I got a phone call from the Legion in Gaspé to do an amateur hour. And then the Barachois Legion got me to do an amateur hour with two guys who didn’t show up so I did the show for the night. They asked me to come back and do a full show for myself, not an amateur hour. And I spent a whole summer doing shows there. I also did the Malbay Festival, playing in the set breaks for Tammy Adams and Pamela Rooney on both nights. That was hard on my voice. Because it was outdoors. I started at 8:30 and went until 2 in the morning. On a regular night I could do that inside. But the dampness got to me and I had to do the same thing the next night. Being outside in the damp made it ten times worse. It took twice as long for my voice to recover from that.

Glenn: Did you ever deal with stage fright when you were first starting to perform?

Nash: Yes. I would never get up on stage. I was way too shy.

Glenn: But the first time you played in front of people, how was it?

Nash: It was after I realized that the people were enjoying it and not booing me off the stage that I built up my confidence. I thought: well while they’re liking this, I might as well keep on going. And now it’s like nothing.

Glenn: So you mentioned a bunch of places like the Legion and the Malbay Festival, the two legions. Are those the places to play in Gaspé or are there other places you’ve found yourself at?

Nash: Well I did a show for the elders at the Manoir. But from what I know, those are the only places that I know of. Unless there’s a concert that comes for Canada Day or something, they’ll put up a stage wherever they’re having it. But other than that, that’s all that I know of.

Glenn: Do you think Gaspe is a good place for playing country music overall?

Nash: Well yeah. Because there’s a lot of fans of it. Like if you go to a city the people that like country music will show up but you don’t know how many that will be. But around here you know the majority of people will show up. So it’s a good place if you’re looking just to have fun with a bunch of people that are going to play with you—a perfect place. 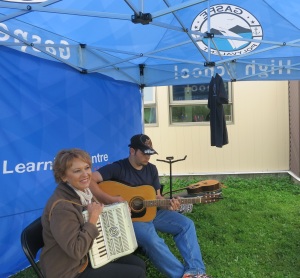 Glenn: Are there specific challenges to trying to put your music out there here in Gaspé?

Nash: Not really. Not that I’ve seen. I just played as much as I could and finally I just started getting noticed.

Glenn: Do you think you’ll kind of outgrow it though? I know everyone likes it, but do you think ever it’s too small?

Nash: Yeah, the problem was with the summer is when I was playing at the Legion, they had me every Saturday and sometimes twice a week, on Wednesday and on Saturday. It was hard because I was always playing the same songs over and over again all summer. I didn’t have any time to get new ones. But people kept showing up.

Glenn: So the turn-out was consistent?

Nash: Yeah, which was good.

Glenn: Do you have any specific goals in the next few years for where you want to take your music?

Nash: I just hope I can keep doing the music.

Glenn: And how about playing with other people? Right now you are using the laptop for your backup music. But do you want to get a band together at some point?

Nash: I’d love to. Because karaoke is easy to use but it’s not the same. When you play with other people it’s more lively. It makes you feel more alive. But I’ll stick with what I’ve got for now.